The Psychic’s Guide to Handling Pains In the Ass

Let’s face it:  no matter how spiritual you try to be, at some point, you will encounter people who are — to put it bluntly — pains in the ass.  They push your buttons, work your last nerve, make you want to  punch something.  They can be a co-worker, neighbor, boss, family member, client.  They are someone you can’t easily get away from.   Here’s how they dealt with it on Seinfeld:

Other than “Serenity now!”, there are some practical tricks you can try.  Like the Ice Cube method: write your personal PIA’s (pain in the ass) name on a slip of paper.  Put it in any small container filled with water and stick it in the freezer.  Their ability to interfere, aggravate or otherwise drive you nuts will be sharply curtailed.

This is an old bit of sympathetic magic that  doesn’t harm the person, which is very important.  According to the laws of nature magic, whatever you put out will come back to you “three times three” — this is why Wiccans include “with harm to none” in  their workings.  So as much as you’d like to punch them in the snoot, please control yourself and head for the ice tray. 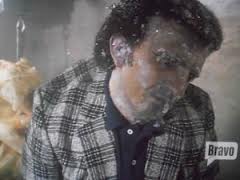 For all you “Goodfellas” fans, this is not the kind of “ice” I’m suggesting….

My sister has a boss that would make the Dalai Lama lose his shit.  She had tried everything to make their working relationship better, but he continued to belittle, insult and interfere.  I told her about the freezing method; she went home and stuck his name in her big downstairs ice chest.  Guess what?  The next day, he started heading towards her in the hallway, with that look on his face indicating that he was about to deliver his usual morning beatdown- but all of a sudden, she saw him stop dead in his tracks, turn around and go back to his office.  Since then, he’s largely stayed out of her hair.

There’s a variation on this technique involving water.  If there’s a PIA you need to sit near, say for a meeting or event, put a glass of water between the two of you to block the negativity.  I read about a fellow psychic who did outdoor fairs.  There was one other reader no one ever wanted to work near; she was a raging PIA and her negative vibes kept customers away.  Well, our psychic found herself stuck next to the PIA, and there was nothing she could do about it.  So she poured a cup of water and set it between their tables.  Guess what?  She got more business than any one who’d ever been placed in that slot before.

If you have a really irritating neighbor, put water in mason jars and dot a few along your property line. If you live in an apartment, put it against a common wall.  Just make sure to dump the water down a sewer drain and NOT in your home’s system.  Don’t want that janky vibe coming back into your domain.

Crystals are another helpful tool to block the aggravation of a PIA. Wearing them or keeping a chunk in whatever space they may show up in works. Rose quartz has a gentle, loving vibe that will increase your understanding of why a person is being so obnoxious.

When all else fails, you could chunk it at their head, too….

If you need to up the protective wattage, black obsidian will absorb the bad juju coming off that person. One of my friends who read in bars –not something I recommend — used to keep a giant piece of black obsidian in her bra to protect her heart chakra.  Kinda made her look like she had a third breast, but it did the trick. 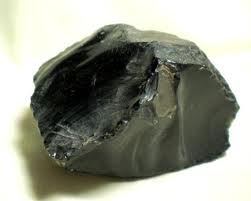 You could chunk this one, too!

For that matter, wearing something black will also have a shielding effect.

Creative visualization is also useful for dialing down the irritation of the PIA.  As tempting as it might be, don’t visualize them getting hit by a bus (remember that “three times three” rule); better to envision yourself not being affected by whatever it is they do that makes you nuts.

These are all stopgap measures.  Over the long term, consider that when someone in your life is rubbing your fur backwards, they’re giving you a chance to learn something — if its only to learn creative ways to swear silently.  “Serenity now!”